THE PAYSON STORY IN WORDS AND PICTURES

In 1858, Bishop Charles B. Hancock constructed a grist mill located at 300 South and 200 East (today’s address).  This was the second grist mill that he was involved in constructing.  The first one was located at approximately the location of the Intermountain Farmers at the rear of the present day Getaway Furniture. The new mill was known as the Hancock Mill for many years.  It was built as a “make work” project for the benefit of the poor.
The Hancock Mill was a two-story log mill operated by an over-shot wheel run by buckets eight feet long and eighteen inches deep. 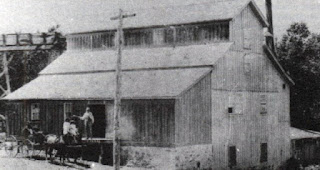 
In 1880, the grist mill was purchased by the Payson Cooperative Institution.  James Finlayson was the millwright.  After a year it was sold to Mr. Finlayson and became known as the Finlayson Mill.  It operated until 1901 when it was destroyed by fire.  The Payson Electric Light and Power Company had a dynamo, owned by Thomas E. Daniels Jr. and George W. Hancock.  During the daytime this power was used by the mill to grind grain and from six P. M. until midnight furnished power to many residents of the city. 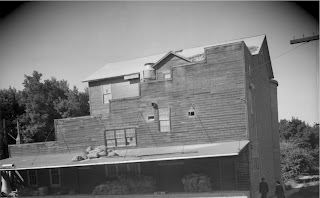 In 1909, Thomas F. Tolhurst came to Payson to investigate a location for a grist mill.  He had gained milling experience at the mill located in Leland near Spanish Fork.  He built a rollar mill on the site of the old Finlayson Mill.  The new mill was equipped with the most modern equipment that he could obtain.  The mill could produce seventy-five barrels of flour a day.
Mr. Tolhurst died in 1931 and the mill was sold to Ammon Hermansen.  By 1935, there was new large capacity grain cleaning equipment installed in the mill.  The mill was closed in 1955 due to the illness of the miller, Richard Wilson.  After that Mr. Hermansen used the mill to store flour produced at the Nephi mill that he operated.
The mill building and property was later purchased by Elmo Dockstader.  He had previously restored the old Francom home on the northeast corner of 100 North and 500 East.  This home had been vacant for many years.  He had also restored the old Payson Substation on North Main into a residence.  He had plans to restore the old mill for new uses.  He had converted a portion of the old mill into living quarters but later sold the property without finishing the restoration he had planned.  The building was later torn down.
The old mill has become nothing but a memory to many Payson residents. It was torn down several years ago and a beautiful new home now occupies one of the important locations in the history of Payson