The Payson Historical Society is currently hosting a display of the Payson Senior Citizens Woodcarvers.  The display will be shown at the Peteetneet Museum during January, February and March.  Don't miss this outstanding exhibit showing the talents of our senior citizens.  The Payson  Historical Society is honored to host the exhibit showing the work of the group over the past year.
Click on any photo to see  more details. of the carvings.  The Peteetneet Museum is open Monday through Friday from 10:00 AM to 4:00 PM. 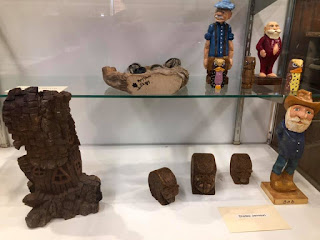 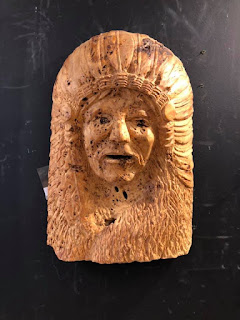 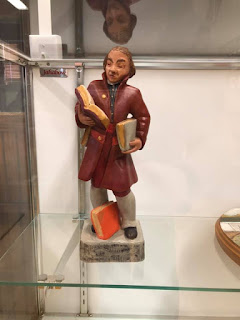 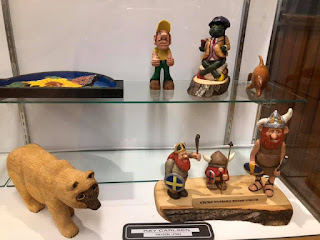 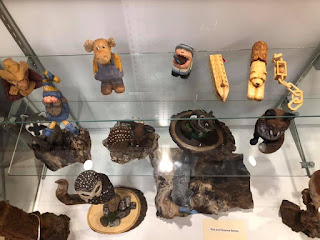 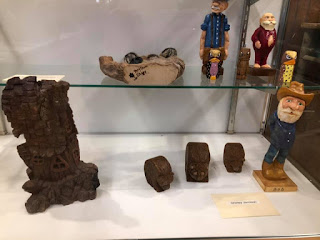 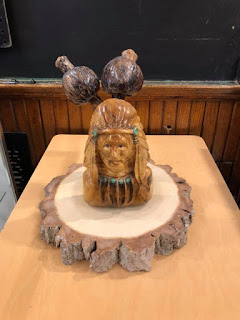 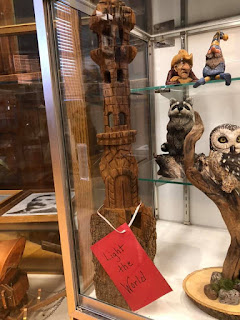 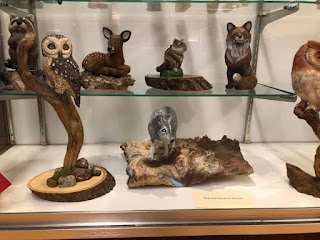 
Chief Peteetneet, (pronounced Paw-tee't-nee't), was a clan leader of a band of Timpanogos Indians that lived near Peteetneet Creek that runs through the current city of Payson.  The group was  a part of the Ute Indian tribe.  The original community  was named for him.
His band was semi-nomadic Ute tribe, that lived in semi-permanent, grass-thatched, wattle-and-daub houses.  They  roamed throughout the Utah Lake area as well as today’s Sanpete and Sevier counties. Together with Chief Tabby-To-Kwanah, they led seasonal migrations through the canyon each spring and fall. Peteetneet’s daughter Pomona (Pamamaci = "Water-woman") married the mountain man, Miles Goodyear.  Peteetneet is the anglicized corruption of Pah-ti't-ni't, which in Timpanogos means "our water place".   Goodyear and his wife lived near present day Ogden.  Miles was a small wiry man and his eyes fell upon Pamona he was smitten with her.  She bore him two children.  A few years later, Goodyear went to California, where he later died.  Pamona married a bad-tempered Sanpitch from the Sampete area.  According to legend, he mistreated her and her two children.
In February 1850, Peteetneet’s  village was attacked by the Mormon militia, as part of the Battle at Fort Utah. Although Peteetneet was not there at the time of the attack, he did confront the soldiers at Fort Utah after finding the bodies of several decapitated Indians.
When the first Mormon pioneers arrived on Peteeneet Creek in late October, 1850, they found that Chief Peteetneet was at his camp near the mouth of Payson Canyon.  He noticed three ox-driven covered wagons approaching from the north in the late October sun.  The tribe observed interest as over the next few days as the settlers cut cottonwood trees and constructed a corral to contain their stock.
Chief Peteetneet was friendly, along with his band of about 200 Timpanogos Indians, with the new arrivals in their land.  The Mormon pioneers settled on an uninhabited section of the creek about a mile southeast of Peteetneet's village. It is unlikely that the settlement on Peteetneet Creek would have survived the winter without the benevolence of Chief Peteetneet and his band.
Chief Peteetneet also enjoyed the support of Mormon leaders in the Indian slave trade. Apostle George A. Smith gave him talking papers that certified "it is my desire that they should be treated as friends, and as they wish to Trade horses, Buckskins and Piede children, we hope them success and prosperity and good bargains."
On January 15, 1851, the Indians approached George A. Smith and his company of 118 men (some with families) who were headed to the Sevier Valley.  Peteetneet and his band of six Indians approached the wagon train and wanted to smoke the pipe of peace.
Four days later, on Sunday, Peteetneet and his men again rode into the Smith Camp wanting  to trade with them.  Smith informed him they would not trade with them on the Sabbath, and invited them to come back on the next day.  The following morning, the Saints presented the Indians with lead and powder.  The Indians hung around their camp for several hours associating with the settlers.
Later in the season, Peteetneet and some of his men rode into Parawan where they knew President Smith had colonized.  They came to get their guns repaired.  They stayed for several days, and were joined by Chief Ammon and Chief Walker.  Peteetneet and his clan of about 40 wintered in the area.

The whites in the area had given of their food, but they protested the pasturing of Peteetneet’s 100 horses on the fort’s communal wheat field.  Peteetneet said the land belonged to the Indains long before ti belonged to the Mormons and he would pasture his horses where he pleased and the lush winter wheat fields pleased him.
The settlers repeatedly asked the Utes to control their stock to no avail.  The colonists lost their patience and impounded the horses in the public corral.  Peteetneet considered this to be thievery and he made preparations to attack.  He was forced to call it off due to lack of support.  Yellow Jacket went to the Mormons to plead for the return on the horses.  The settlers released the animals and Peteetneet agreed to never allow his animals in the Mormon fields again.
In February of 1854, during the Walker War, Capt. Charles B. Hancock of Payson, captured two Indians.  One of the captured individuals was the son of Peteetneet.  He held the chief’s son as a hostage.  He sent the other Indian to the tribe with a message that the Chief’s son was being held until plans for peace could be arranged.
The following morning, Chief Peteetneet visited the fort.  A consultation was held and a plan for peace was agreed upon.  The Chief offered fourteen head of stolen cattle as a peace token.  The Mormons agreed to build Peteetneet a home.  In due time, the setters kept their word.  Peteetneet had expressed a desire to learn to build houses, live among the Mormons, raise grain and be a brother to them.
At a local celebration notjng  the July 24th anniversary of the saints arrival in the Salt Lake Valley, the people of Palmyra were preparing a big dinner at the meetinghouse.  A group of young Indians crowded up to the table, getting in the way of those placing the dishes of food on the table.  One of the local men suggested that the young Indians move back.  One of the Indians refused and the man gave him light push.  The Indians, who were armed with bows and arrows, strung their arrows and prepared for action.
Chief Peteetneet was one of the speakers on the stand.  Just as the arrows were aimed at certain whites, Chief Peteetneet rose to his feet and ordered the young rebels to put down their bows and stand back or he would have them flogged.  The young men obeyed their chief knowing he meant what he said.  All those present realized the chief had prevented what might have been a massacre.
Very little is known of the Indian woman that was the wife of Peteetneet. If the whites wrote anything down- it was about the males of the tribe. We know that Chief Peteetneet and Old Lady Peteetneet lived on the Indian Farm located north of Payson in a house built by the whites for them for at least 15 years.
Chief Peteetneet died on December 23, 1861, under somewhat mysterious circumstances in Cedar Valley, Utah, near recently abandoned Fort Crittenden (Camp Floyd).  When Peteetneet died on December 22, 1861, it was said, he had been shot by his wife.   He was buried on the mountainside in Cedar Valley by members of his band. His wife, who was murdered on his express deathbed orders by an axe-wielding woman in his band, was buried in the valley below his grave in order to accompany him into the afterlife.
He was succeeded at the time of his death in 1862 by a near kinsman named Ponnewats, a corruption of Pa-ni-wa-tsi, meaning "Little Master of Our Water".
Brigham Young made this statement, "Chief Peteetneet, a chief who lives near Utah Lake, is perfect, and I do not believe a better man lives on the earth. He will do good all the time and will not do evil if he knows it." General Church minutes, 31 August, 1854.
In 1901, the  Peteetneet School was constructed and named in honor of this Indian Chief who was a grea friend of the earlier settlers.  The portrait of Old Lady Peteetneet hangs beside her husbands  in a place of honor in the Peteetneet Museum.