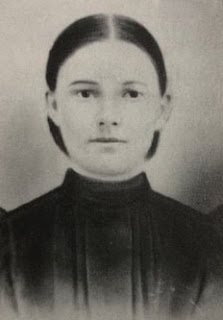 
Harriet Billington was born November 27, 1831 in Audlem. Cheshire, England.  She was the daughter of Joseph Billington and Martha Brown.
Harruet was a vert good scholar.  She learned quickly ad always did her work well.  She was alson very proficient with both regular sewing and fancy work.
When the gospel was introduced to them, they very quickly understood and accepted its truths.  The family was also baptized members of the Church of Jesus Christ of Latter-day Saints.
In 1842, the family set sail for America.  When they arrived in Nauvoo, Harriet became acquainted with the Prophet Joseph Smith ans his brother, Hyrum.  When they were killed by the mobs, she deeply mourned their deaths.   However, she did accept Brigham Young as the new leader of the church.  When leaving Nauvoo she and her parents crossed the Mississippi River and went on th Council Bluffs.  While there, her mother passed away.
Harriet and her father crossed the plains with the Second Company of Saints in the fall of 1847.  In 1849,Harriet met a young stonecutter named Joseph William Bates.  On December 10. 1850 the were married.
In 1857, Harriet went with her husband to the mouth of Little Cottonwood Canyon where he was involved I cutting stone for the Salt Lake Temple.  They had two small children at that time;
The family later moved to Payson to be near the other members of the Bates Family.  He built his family a two-story brick adobe home with six rooms, a wide hall and porch and a balcony.  At that time it was one of the nicer homes in the community.
In 1879, Joseph became ill and wad unable to work.  He passed away on June 30, of 1890 and was laid to rest in the Payson Cemetery,
Harriet was privileged to attend the dedication of the Salt Lake Temple in 1893.  She felt the closeness since her husband had helped to cut some of the stones used in the construction of the new edifice...
Harriet had been a widow for nineteen years when she passed away at the age ofseventy0-eight and was buried beside her beloved husband in the Payson Cemetery.
Posted by Dee at 1:29 PM No comments: 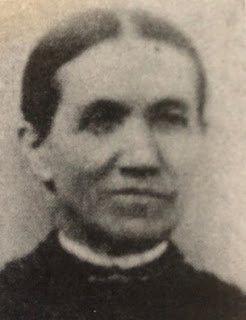 Eliza, her mother and several of her sisters could not deny their testimonies of the church and remained faithful to their new faith.  Eliza was very distraught at displeasing her father.  She  rise early on Sunday mornings and walk eight miles to attend services of the church.
While Henry Westland Barnett was serving a mission, me became acquainted with Eliza.  Henry hailed from London, England.  They were later married on March 25, 1862 in a little town near  Newcastle on Tyne at the home of a friend.
Shortly after their marriage, they left for America.  It took six weeks for the ship to reach the shores on America.  After arriving in American they took a thousand mile trek westward across the prairie where they lived in a dugout for a period of time.  The later traveled with the Homer Duncan Wagon Train on their travels to reach Zion.  They arrived on September 24, 1862 where they would make their new home.
Eliza suffered through many trials and hardships.  Her family lived in extreme poverty at the time.  Her spirit was never overcome by the struggles she endured in her life in her new home.  She became the mother of thirteen children, seven boys and three girls.  Three of her children died as infants.
Her husband, Henry, answered the call and served two more missions.  While he was away on his missionary service, Eliza was left to care for their home and children.  She was an expert dressmaker and helped her family make a living.
When they made their home in Payson, their home was outside the outskirts on the community.  With her husband away much of the time, she was left alone with her children.  During the Blackhawk War.  This was lasted from 1865 to 1872 in the area.  She faced whatever danger their was without any help.  She was a brave and faithful woman.
Eliza served for many years on the local Old Folks Committee.  She was also called into church service in the women’s organizations of the church. She answered the call and was the counselor to the District Relief Society President.  She then served as a Primary Presidnet.
Eliza passed away on December 19, 1950 in Payson at the age of seventy-five.  She was buried in the Payson Cemetery.  Her husband, Henry, joined her in the family plot almost two years later on November 14,1917.
The missionaries serving in Aberdeen at the time taught the family the gospel of the new American church.  The entire family joined the church and were baptized members.  Due to the actions of a missionary, her father forbade his family to have anything to do with the church.
Elizabeth Mitchell, Eliza as she was called, was born November 28, 1840 in Aberdeen, Scotland.  She was the daughter of William and Ellen Legg Mitchell.  Her family was early converts to the Church of Jesus Christ of Latter-day Saints.
Posted by Dee at 11:12 AM No comments:

Thomas Poulson Cloward  was born in Pottstown, Chester County, Pennsylvania on December 10, 1823 and lived with his parents, Jacob and Anne Pluck Cloward, until he was fifteen years of age.  He was the fifth child and had nine brothers and sisters, Catherine   Ann, Charlotte, Daniel Henry. William, James Mason, Jacob Elijah, Albert Wilson, Hannah Jane. and   Eliza Ann.   They lived in Pottstown until after his brother Jacob Elijah was born, then they moved to Wilmington,   New Castle,  Delaware where Albert Wilson, Hannah Jane and Eliza Ann were born. He was then apprenticed to Mr. Poulson, a shoemaker. Thomas remained with him until the spring of 1844, and it was at this time that he added Poulson to his name.
After accepting the Mormon faith, he went to Nauvoo, Illoinois, After his arrival in Winter Quarters with the exiled saints, he became aquainted with a young lady, Mary Page, whom he courted and later married on the 25th of March, 1847.
Two weeks later, oftThe same year there was a company organized, and he was chosen one of a band of 143 to come west to the Rocky Mountains and find a resting place for the saints. They left in the sixth day of April, arriving in Salt Lake Valley July 24, 1847. He left his wife in Winter Quarters and Thomas  left to head west  with the Brigham Young Company of pioneers. He was one of eight scouts who came to the Salt Lake Valley July 22, 1847, looked over the country and reported their findings to Brigham Young.
After his arrival in the valley with the Pioneer Company,  Thomas is credited with making the first pair of shoes in the Salt Lake Valley. The wife of Heber C. Kimball, Ellen Saunders Kimball, was badly in need of shoes after the long journey. Thomas took an old pair of boot tops, sat down on the ground where the old Z.C.M.I, later in what would become the downtown area of the ciity.  He made her a pair of shoes, also a pair of moccasins from the scraps for the little one she was expecting,.
In the fall of the same year, Mr. Cloward returned to Winter Quarters to assist other saints in their exodus west. The following spring,  he crossed over to the east side of the Missouri river, there built a house and made some small improvements on government land. The winter of 1848 Thomas moved to St. Joseph, Missouri and remained there until the year 1852.  He then fitted himself out with a yoke of oxen, a yoke of cows, and a wagon. With his wife and two children, he joined Captain David Wood's Company leaving Kanesville, Iowa in June and again crossed the plains to Utah.
Thomas left Salt Lake that same year and settled in Provo, and here he took a plural wife.  He met and married Mary Amelia Gardner, daughter of Elias and Amy Pritchard Gardner in the year 1853. He remained in Provo nine years then moved to Payson, Utah where he set up a shoemaking establishment.  A pair of high heeled ladies shoes made by this artisan was  highly prized; and "there was not a child in the settlement who wore neater footwear, or a young man at the dance who was more proud of his boots, than the boys whose father was Thomas P. Cloward. After the boys were married. he made shoes for their wives. Often the young boys' boots were made of brown leather with bright red trim around the top."


When Mr. Cloward  moved to Payson from Provo he erected a cabin on the current highway, east of town. Later,  he built a cabin further west and still later built a fine brick home.
He had eight children with his first wife and eleven children with his second wife. After coming to Payson, heI built a  cabin out in the fields east of town.  He worked as a  shoe maker until the Salem Canal was started. He  took an active part in building this canal which brought the much needed water to this little valley. I\
He was called to go to Echo Canyon to take part in what was called the Buchanan War of Utah War. The President of the United States, James Buchanan, sent out a  large army to invade Utah, as it was reported that Mormons were not loyal to the Government. This happened to be one of the coldest winters, and many hardships were encountered. Food and clothing were scarce. Some had to wear rawhide on their feet and boiled rawhide for food. They had no woolen clothing to wear and standing guard in the wind and snow while their clothing froze to their  bodies. In the Spring of 1858, they were called home with the loss of only one man.
Although driven from home by mobs under the guise of law. he never felt disloyal to the flag and Constitution of the United States. In 1852,  he came to Provo, and there assisted in building a fort to protect the people from the Indians. He served in the Walker War under General Conover. He also served in the Black Hawk Indian War under General William McClellan, and was always to the front in defending the homes of the people. He was also one of the prime movers in the construction of the Salem Canal, which cost in the neighborhood of $45,000 and made possible one of the richest fields in the wes tern country. He has always been identfied in many ways with building up of this section of the country.
Thomas Poulson Clowardlived a  long life. and was a  joy to his numerous posterity. He died the 16th of January 1909 in Payson, Utah, and is buried in the Payson City Cemetery in the family plot along with this two wives.