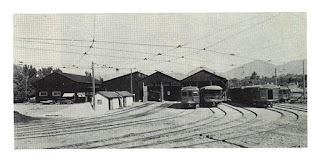 May 20, 1916, saw the last day of rail laying on the main line of the Salt Lake and Utah Railroad, also known as the Orem Line.  The last spike was driven in the streets of Payson on May 26 and 27.  The two days were set aside for celebrating both the arrival of the SL&U and the government's large Strawberry Reclamation Project. Immediately 24 trains a day made the complete run from Salt Lake to Payson, a distance of 66.6 miles. By July, service had increased to 26 trains a day, which was the largest number ever operated to Payson. From then until final abandonment, service was gradually cut back.  During the Twenties, an average of 16 to 18 trains were run daily. The lowest point was reached in 1937 when only ten daily trains were scheduled.


The location of the SL&U's shops was a bone of contention all along the route of the Orem Road.  Provo, being the largest of city in Utah County and centrally located, made a very strong bid, with its various newspapers carrying front page editorials on the subject. Lehi also wanted the SL&U shop payroll, as did American Fork. Mr. Orem refused to commit himself, however, until the road was completed to Payson. Then he made the announcement: the SL&U's shops would be built in Payson. Considerable resentment arose, especially in Provo.  Provo felt put out, for certainly it was the main reason for SL&U's existence and would provide the lion's share of SL&U's business.  Mr. Orem perhaps reasoned that the SL&U in future years would build on, to Nephi and perhaps much farther. Such an event would make Payson a central point for  the construction of shops for repair of the trains used in the system. Virtually every city on the line clamored for the SL&U's shops, but it was Payson which got them -- a questionable choice.  Ground for the Payson Shops was broken in June 1916.  The location selected was located between 100 North and Utah Avenue and from 400 East to 500 East. When the shops were completed later that year, the SL&U was in possession of one of the finest interurban car maintenance centers in the west


The SL&U line came  from the east through a deep cut just north of the Peteetneet School.  It then entered the street for the run to the center of town. Just as the single track hit pavement, there were the repair shops, on the south side of the street. An entire city block was purchased by Orem, with the shop and car house buildings located slightly off-center to the southeast. Five tracks entered buildings, while three storage tracks ran alongside the car house on the southern edge of the block. To the rear of the buildings was an open area for the storage of poles, rails, etc. On the north frontage of the block were three more tracks, also used for car storage.


Orem built his shops on a somewhat less pretentious scale.  The framework was of light steel and siding was of corrugated iron. He did not skimp on the necessary machinery, however, as witness the very good rebuilding some jobs performed wrecks by the employees of the shops.


The passing years laid a heavy hand on Payson Shops. Not being built of permanent material, the buildings became rusted and weather-beaten. Their woe-be-gone air indicated all too clearly the fact that SL&U had fallen on evil days. After the road was abandoned, the shops were sold to Payson City.  The city used the shops for the City Shops for many years.  Payson City later built new city shops just north of the Payson Sewer Plant.  The property was then sold to Intermountain Farmers Inc.  They demolished to old shops and constructed a new building to hours their business.  They later relocated to Spanish Fork and Best Deal Spring Service is now found in the location.


The final closing of the interurban in 1946 brought to a close a thirty year run.  It served the population of Utah County for many years.  Today, we find few remainders of the old line or the roadbed it once traveled over. 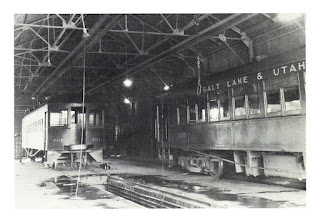 INSIDE OF OREM SHOPS 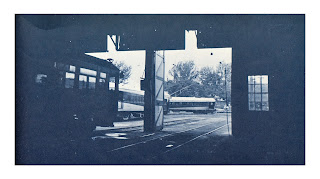 INSIDE OF SHOPS LOOKING OUT WEST DOORS 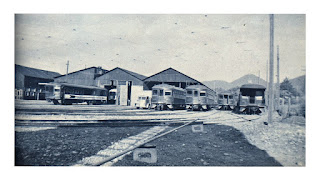 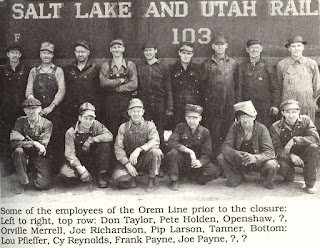