The Payson Opera House was constructed in 1882.  At the same time, John E. Betts built a hotel adjoining the Opera House.  Mr Betts operated the hotel at the same time he was serving as manager of the Opera House.
Many of the traveling theater performers stayed in the rooms of the hotel.  There were doors leading from the Opera House into the lobby of the  hotel.  Theater goers were able to go into the hotel lobby during the intermissions of the performances.  The hotel also had a dining room  where meals were served to patrons and local townspeople.
Later the hotel was sold to a Mr. McCann and he renamed the hotel the McCann Hotel.  He had a large sign painted on the north side of the building.  The building was repainted in 1965 and the sign was covered over after being there for many years.
In 1886, the Wightman Hotel was constructed on the corner north of the Betts Hotel and the Betts lost some of its popularity.  In 1900, a new dance pavilion on West Depot Street (Utah Avenue) was constructed by the Payson Silver Band  and this also contributed to the decline on the hotel.
In 1905, George Done purchased the hotel and converted it into apartments.  Mr. Done also purchased the Gayety Theater in 1908.  It was located just west of the Huish Furniture building on First North.   He later built a new theater on Utah Avenue and moved the Gayety to that location.
In about 1918, the former hotel was purchased by Thomas F. Tolhurst.  Mr. Tolhurst was a banker and a miller.  He owned and operated the mill located on 300 South and 200 East.  The apartments were remaned the Tolhurst Apartments.  Mr. Tolhurst also purchased the Opera House next to the hotel.  He used the Opera House for storage for his mill.
Mr. Tolhurst upgraded the apartments and they enjoyed a few good years until his death in 1930.  The apartments then fell into disrepair as various owners came into possession of the building.  Most of them put very little money into any improvements or repairs.
In 1965, Leland and Florence Daley purchased the apartments and renamed them the Flora-Lee Apartments.  They did many upgrades to the building and the surrounding grounds until Mr. Daley’s death in 1971.
Since 1971, the apartments have passed through numerous owners.  At the present time, the apartments appear much as they did in 1971.  The subsequent owners have tried to maintain the appearance and serviceability of the building.
Today, the 135 year old Betts-McCann Hotel building fits in well with the surroundings of the renovated Opera House that is now a popular local restaurant and Zions Bank that replaced the old Wightman Hotel the burned down many years ago.  Today, the apartments are known as The Wellington Apartments. 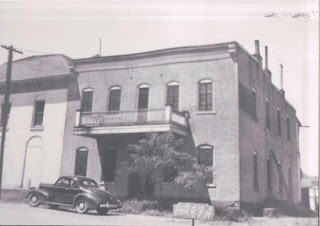 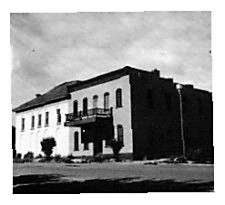 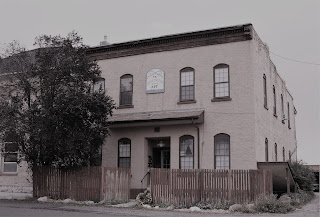