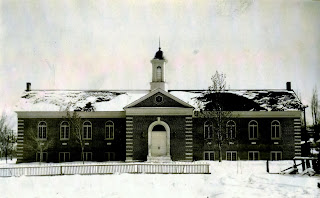 After the division of the Payson Ward into the First and Second Wards, the  First Ward met in the Charlie Long Hall on 100 North between 300 and 400 East (in today’s address system.)  In 1910, a new cream-colored brick church was constructed just west of the Charlie Long Hall.  In about 1924, after the creation of the Fourth Ward, the First Ward began attending meetings in the old Assembly Hall located on 400 East and 200 South.
The Assembly Hall  had originally been built as a school house in the 1870's.  It was later used for the storage of  grain and other products.  The building was razed and a new building for the First Ward was constructed on the site  in 1930.  Otto B. Erlandson was the Bishop.  He was one of the owners of Central Lumber.  The building was enlarged in 1965 with the addition of a cultural hall, kitchen, and classrooms.  The older section of the church that once contained a cultural hall and kitchen was also remodeled.  The Cultural Hall was converted into classrooms and office space.  It later housed both the Payson First and Fifth Wards for almost sixty years