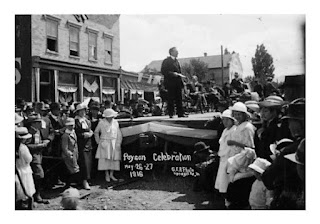 May 2016 marked the 100th Anniversary of the completion of the Örem Railroad” and the Strawberry Highline Canal.  These two events help to change the history of Payson and the surrounding area.


The citizens of Payson had promises of an electrically operated railroad to run from Salt Lake City to Payson.    On February 24, 1903, Walter C. Orem was granted a permit to build and operate an inter-urban railroad between Salt Lake City and Payson.   The train was financed by A. J. Orem and Company of Portland, Maine and Simon Bamberger's Inter-urban Construction Company.  Mr. Bamburger had opened his own line in 1896 when the section running between Salt Lake City northward to Ogden was completed. Steam Locomotives pulled the train until May 28, 1910 when it was converted to use electricity.
Mr. Orem, a rail construction veteran, was able to obtain $2 million from Boston and Portland backers, matched by local funds. In less than a year Orem had selected a route, bought and surveyed the rights-of-way, prepared the grade, and strung an overhead catenary to carry 1500 volts. In another year he had built the roadbed, installed track, and erected costly overpasses. Four UP&L substations powered the interurban plus streetcars that connected Provo and the Brigham Young University campus. The plan was to extend the line to Nephi, meaning that the entire Wasatch Front would be spanned by electric mass transit. By 1913 four gas-and-electric trains per day were running from Salt Lake to American Fork. By the next year 800 passengers rode daily between Salt Lake and Provo. Each subsequent year brought expansion: 1915 to Springville, 1916 to Payson. 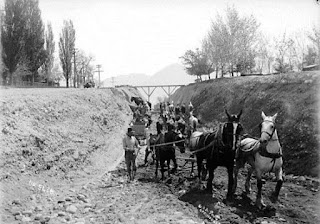 The new line south from Salt Lake City was known locally as the "Orem Road" for A. J. Orem & Company, whose handling of the financing and construction of the line under the direction of W. C. Orem, the active head of the company, has been marked by high efficiency throughout. The Orem interests took hold of the project late in 1912 and would have the line in actual operation in little more than a year from the time they assumed control. The work accomplished in the period included the making of all surveys and plans, the securing of rights of way, the purchase of large quantities of material and equipment, and the actual construction of the railroad.
The Salt Lake & Utah Railroad "The Orem Line", ran 67 miles from Salt Lake City to Payson. The train ran straight through Provo. The Provo depot was located where the NuSkin building stands now on the south side of Center Street.
The "Orem" line was completed from Salt Lake City southward to American Fork on March 23, 1913 and reached Provo in July of 1914.  The line extended further to Springville by July 1915, Spanish Fork in November 1915, and Payson on March 24th, 1916.  The plans to extend the line 25 miles to Nephi were never completed due in part of the United States entering World War I, although the surveying was completed in 1917. 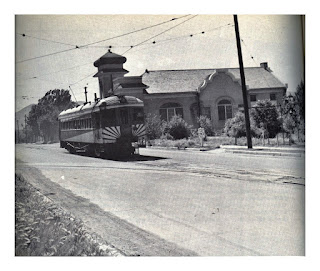 A car on the Orem line just passed the Car Barn heading toward the station.  Passing by the old LDS 4th Ward Church.


May 20, 1916, saw the last day of rail laying on the main line. The last spike was driven in the streets of Payson. May 26 and 27 were set aside for celebrating both the arrival of the SL&U and the government's large Strawberry Reclamation Project.  The first train arrived in Payson about 9:30 A.M.  Mr. Orem and his daughter were met at the station by the Payson Silver Band.  At 10:00 A.M. the last spike was driven by Mrs. George Done, the Carnival Queen and Miss Gladys Orem.
After leaving Spanish Fork, the line went south to Salem and then turned west toward Payson. A large cut or roadbed excavation was necessary just north of the Peteetneet School.  The dirt removed from the cut was used to build an elevated roadbed going east toward Salem.  As the line moved eastward toward Salem the roadbed eventually became almost level with the  state highway that ran adjacent to it.

The Orem Station was located just west of today's Daley Freeze where we find the parking lot of the Crest Convenience Store.
George A. Cheever Sr. was one of the employees of the Orem Line almost from the beginning of service.  He continued for nearly thirty years until the train service was ended.  He originally came to Payson as store keeper working with supplies in the north building of the shops that were located on 400 East and 100 North.  He later also took over in 1932 as the station agent as well as retaining his previous position.
Immediately, 24 trains a day made the complete run from Salt Lake to Payson, a distance of 66.6 miles. By July, service had increased to 26 trains a day, which was the largest number ever operated to Payson. From then until final abandonment, service was gradually cut back. During the Twenties, an average of 16 to 18 trains were run daily. The lowest point was reached in 1937 when only ten daily trains were scheduled.
The line ended in Payson at the Interurban Depot that was located just east of Main Street on 100 North where we find the parking lot of the Crest Convenience Store today.
What happened to Utah's inter-urbans? At first they were able to compete with automobiles--despite low petroleum prices and government highway subsidies--through superior service. But eventually equipment and rail beds needed costly maintenance. As early as 1925 the Orem line had cut back scheduling by one-third.
The Great Depression sent the Bamberger and Orem lines into receivership. Their demise was helped by an active campaign by oil and auto conglomerates to buy up interurbans only to shut them down. World War II brought a temporary boom to the line. But after the war, Utah railroads lost money, while their petitions to the Public Service Commission to shrink services and thus costs were rejected. In 1947 the last line ceased operation.  The rails were removed and the large cut north of Peteetneet was filled in.
The Orem Inter-urban provided a great service to Payson and the communities of Utah County for more than thirty years.  Today, we are seeing the planning and completion of a new interurban railroad line known as Frontrunner that is part of the Utah Transit Authority.  This second inter-urban line will also benefit the communities and populace of Utah County.  The new Frontrunner line is scheduled to arrive in Payson in the next few years.
Posted by Dee at 6:30 PM