REMEMBER WHEN FROM THE PAST--ONION DAYS FIREWORKS 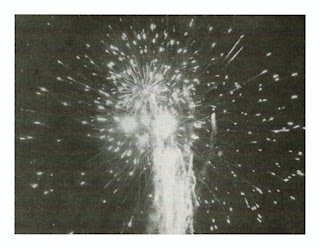 This week has been tough thinking  of what I wanted to write about. I just felt really dull or brain dead but my oldest daughter told me I was just operating on 40 watts and soon I would brighten up.
Well--I guess that got me to thinking  about the  fireworks we have every year at Onion
Days. (I'm not to a 75 watt yet).   Since it is nearing Onion Days, I wanted to keep in tune with the celebration in my column. 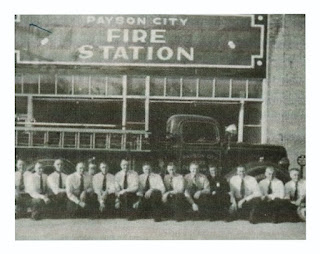 
Everyone loves the fireworks. Things are different now than they were many years ago when my husband  Frank  joined  the  Fire Department. They used to have 2 or 3 plywood barricades that they stood up between T posts.  They dug holes in the ground to put tubes down in and then they would go along and put the  Department in 1944 fireworks in the tube. There were holes drilled in the plywood that they would put the fuse up through. Then the Fireman would go along and light the fuse for the fireworks to go off.
The barricades were there to protect the firemen because there were times when one of the fireworks would explode before it went in the air. I've seen many a fireman duck and run when that happened. I don't recall anyone ever getting hurt but it was a little scary. 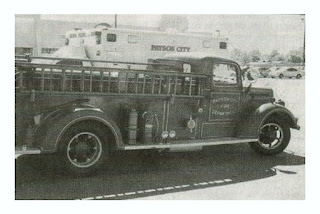 ONE OF THE OLD TRUCKS USED YEARS AGO


The fireworks was always held at the race track and people would park all the way around the track and up the canyon road.  And of course they had the big grandstand you could sit in. Our favorite place  was across the street on the old high school gym lawn. We would take blankets and  goodies and set out there with the kids and watch the beautiful display. When the kids were really little, the loud ones always scared them. (and I suppose they still do).
Another placewe liked to go to see the display was at Donand  Cleo Burdick's (Brad's folks).  They lived across the street from the old gym (which is now our new swimming pool).
We could sit out on their lawn and watch and my folks always loved to visit with the Burdicks. They  had lived next door to us for a lot of years before they built that home.
Back then, the firemen would work in teams. Some would drop the fireworks in the tubes and  set them up ready to be lit , another crew would go along and light the fuses and then another crew  would  come along after they had discharged and clean out the tubes to make ready for the next round. It was a lot of work.
The Lady Firemen Auxiliary would always see that food was made and brought up so the
firemen could  eat before the display. (actually they still do).
Now the whole display has to be in compliance with the new laws. The fireworks come in the tubes all ready now.   A truck comes in with all the equipment that is needed and the firemen start about noon setting everything up. This is much safer for the men and our woman firefighters.
The fireworks have always been held on Friday evening about 9 p.m. I remember as a little girl, my folks would always take us to the fireworks. They were exciting and still are. Now instead  of the race track (which is no longer there) they have them at the Payson Jr.  High Fields and it's nice. 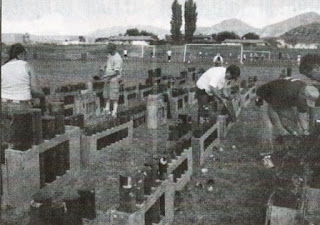 THE WAY FIREWORKS ARE SET UP TODAY

The amount that Payson City alots has been about $8,000.  (That's a lot of money to go up in smoke) They have  paid the same amount for at 15 to 20 years which is unusual because everything else has gone sky high in price.
Years and years ago, they had one of the firemen that was over buying the fireworks each year and I remember the year my husband was over it and boy was I shocked at how much they cost even then.
Another  thing that is different now than it was back then, and that is everyone  of  those firemen that you see out there on the field lighting those fireworks has to go through a training every year and pass the test to be certified to set them off. (my how things change.)   Things are so different now than they were back many years ago.
There is really a lot of work that goes into bringing the entertainment of the of  the fireworks display to the citizens who come to watch and get excited over the beautiful and loud fireworks.
I miss the old race track that we sat around to watch the fireworks but it is just a lot of fun
to look back and remember when....
Posted by Dee at 7:11 PM