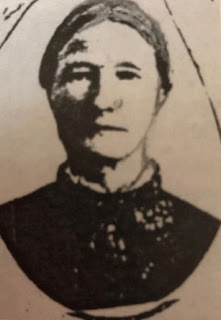 Fanny was born on October 5, 1813 in Thorpe Malson, Northampton, England.  She was the daughter of Thomas Esson and Frances Stanyon.  She married Thomas Clayson on November 2, 1835.
The two eldest children, when they were about 12 and 14. Went to Wellingborough to learn the shoe making trade.  One of the workers in the shop was John Sheffield.  He was a member of the Church of Jesus Christ of Latter-day Saints.  The two children became interested in the American religions teachings and doctrines.  They became members, contrary to the wishes of their parents.
Later, Fanny and her husband were converted and baptized.  They worked hard to support the family and to see that each had the opportunity to emigrate to Utah.  The different family members left in 1860, then 1863, 1864 and 1866,
Fanny, Thomas, and their youngest son, John, left England in 1868.  They sailed on the ship, “John Bright” and landed weeks later in New York.  They then traveled by rail to the end of the Union Pacific line that ended in either Laramie of Benton, Wyoming at that time.  They finished their journey to Utah by wagon train.
Their son, Nathan and his wife, went by team from Payson to Weber Canyon to meet them.  The family settled in Payson where many of their family had located.
Fanny was a good wife and mother to her family.  She encouraged her children to develop their talents and be good citizens.
The Clayson’s son, William became a well-known musician and composer,  He was very talented at composing music.  He collaborated with several other local men and the L. D. S. Hymn book has 26 hymns in it that were composed and written by them.  The Payson group has more hymns in this book than other group in the Church of Jesus Christ of Latter-day Saints.
Fanny truly left a “legacy of faith” for all her descendants.  Fanny passed away on November 10, 1885 and Thomas passed away on April 4. 1889.  They are buried next to each other in the Payson City Cemetery.

They were converted and baptized.  Eventually the entire family of eight emigrated to American and joined and 1868 wagon train and arrived in Utah.
Posted by Dee at 2:28 PM