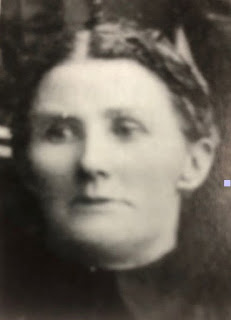 Margaret Powell was born  March 12, 1848 in Llanover, Wales.  She was the second daughter of John Powell and Elizabeth Harris Powell.  She was stricken with cholera when she was five years old and given up to die.  However, her father gave her a blessing and promised her that she would grow and become a useful woman in Zion.
Soon after Margaret turned eight years old, along with her family set sail for America.  They sailed from Liverpool and it took them six weeks to reach Boston.   They then traveled by train and boat to Iowa City.  They then crossed the plains with a handcart with the Ellsworth Handcart Company.
When Brigham Young sent wagons to meet these weary travelers and help them into the valley.  Margaret refused to ride.  She said, “I have walked this far and I want to walk all the way.  They arrived in Salt Lake City on September 26, 1856.
They soon settled into a small log cabin with no furniture.  As soon as they settled, her father, John Powell, began to work on the temple.  He only worked one day when he became ill and died three days later on October 9, 1856.  He left his widow with six small children.  To help out, Margaret went out among the neighbors, tending babies, washing dishes, cleaning, spinning, washing, ironing or whatever she could do to help her family.
Margaret wanted to go to school but she was unable to, but she couldn’t.  However, she taught herself to read and write which was quite an accomplishment.  The family moved to Payson in 1857 and lived in a dugout until they were able to get a home built.
She married James Betts on April 3, 1867 in Payson.  Even though times were very difficult, they were very happy.  She helped her husband build the adobe home where she raised her family.  Her oldest son, James Peter, died as an infant but she raised her other five children in the home.  She mentioned how dear her home was to her since she had helped to build it.
After eleven years, her husband and her brother, David, were killed in a snow slide in Payson Canyon.  The oldest of her remaining children was just ten years old and the youngest was only three weeks old.  Struggling to raise her children as a single parent, she developed as aptitude for nursing and helped many families in Payson, Tintic and other places.  She always tried to help those in need and make their life more pleasant.  Many times she refused to take pay for her services.
Margaret passed away on February 23, 1925 and was laid to rest in the Payson Cemetery near her husband and her infant son, James Peter.  She had been a widow for almost forty-seven years.
Posted by Dee at 3:47 PM