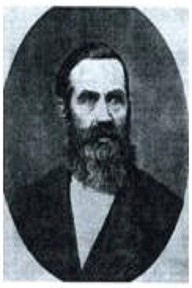 Thomas Daniels was born was  born on September 29, 1829, in Manchester, Lancaster, England. He was the 6th child in a family of nine children of James Eprhaim and Elizabeth Salthouse Daniels. He spent his childhood in Manchester, Lancaster,  England. His father was the Methodist parish minister. Thomas was therefore raised in a  religious environment, and as was expected of a minister's son, he lived as he was taught and set an example of righteous living and correct behavior at all times. Kindness, cheerfulness and charity were developed in his personality very early in life.
The family home of James Ephraim Daniels and Alice Salthouse Daniels was located at No. 109 Shoedell Place, Manchester, Lane, England.  Here the family was raised and the house
was still standing in July, 1887, when he visited it. So says Thomas E. Daniels diary.
Thomas was nine years old when his father died. His family  had been introduced to Mormonism shortly before this time and after his death the whole family joined the Church of
Jesus Christ of Latter Day Saints (commonly called the Mormon Church) and planned to immigrate to the United States. He left England with his mother and six brothers and sisters in 1842 on the ship Medford. They arrived in New Orleans in the late fall, traveled up the Mississippi to St. Louis, where the family stayed during the winter.
Thomas, still a young lad, worked on the freight boats up and down the Mississippi River. His middle name, English, was given him at that time to distinguish him from another Thomas Daniels who also worked on the same boat.  He kept that added name and used it in all his signatures for the rest of his life.
He was living with his family in Quincy, Illinois in 1844. The family had  moved to Nauvoo to work on the temple there shortly before the saints were driven out and was with the saints at that expulsion. He stayed with the group in Quincy, and then moved on to Pisguah, Iowa.
He arrived in Utah in September, 1850 with the Milo Andrus Company and moved to Payson, Utah  Territory on November 23, 1850.  He married Jane Ann Sheffiled onNov. 25, 1855, in Payson. The became the parents of ten children as follows:


He and his family built the "Old Homestead"  three blocks north of the Center of Payson City Survey. This would be the northwest corner of today’s 300 North and Main Street.  He built
a two story adobe house here soon after his marriage.  There was a fire many years later and the second story was removed and it is not a one story home.
Some said the home was too large, but George A. Smith came by and said, "lt i s not too large as he will fill it . " They lived here for more than fifty years, not moving once. Ten children were born to them and also many grandchildren were born in this house. It was modernized before they died.
Through Payson ran the clear little stream known to the settlers as Peteeteetnet Creek (Indian Name). To the east are the lofty mountains of the Wasatch range with rolling hills to the west and the sparkling fresh water of Utah Lake to the North.
Thomas E. Daniels took a very active part in the settlement of Payson and served in nearly every capacity of the settlement. He was Ward Chorister for nearly forty years, and acted as adult Sunday School class teacher. One upstairs room in his home was designated as Prayer circle room. He collected provisions to pay the school teachers and he was the sexton, waterrnaster, and town councilman.
He was called time and time again to go in to the sick and afflicted with faith in administration along with Brother Charles Brewerton and Brother David Lant, in rain or shine,
in the middle of the night and many times where there were contagious diseases. His wife was afraid sometimes that he might bring home these diseases, but he felt that the Lord would take care of him if he did his part and he never once brought sickness to his family.  He had many dreams and visions and knew of the outcome of many things before they happened saying "Surely the Lord God will do nothing but he revealeth his secrets unto his servants and the prophets."
His farm was one and one-half miles north of the settlement. In the winter time he made brooms from the broom corn that was raised on his farm. When there were several dozens made he took a trip in the wagon to Provo, Salt Lake or one of the neighboring towns to sell them at 35 cents each and paid for his assessment on the Provo Tabernacle when it was being built.
For some years he was in the bee and honey business.  He was assisted in all these undertakings by his faithful wife, Jane. When his family was small he spent 18 months in the Eastern and Southern states mission and she did the farming assisted by the two eldest boys, Thomas, Jr. and  James, took care of some sheep, sheared, carded, and wove this wool into clothing for her six children.
One child, Lucia, was born while he was away on the mission. He felt that the gospel of Jesus Christ should be spread to the "honest in heart." .  Thomas English Daniels had been  ordained High Priest in the  Church of Jesus Christ of Latter Day Saints on May 7, 1893, in Provo, Utah, by his brother, James.
Thomas and Jane Daniels celebrated their golden wedding anniversary in November,
1905.  Before  a year had passed they both were called by death.  Jane was first one of the couple to pass away.   Thomas  related how one night shortly before her death a vision came to their
bed first on his side and then around to the other side where she was sleeping and said, "I want her first, you may wait a short time." Before a week had gone by, Jane had passed on October 11 to the great beyond. Pneumonia took her quickly. In another week, on November 6, 1906, election day, Thomas English Daniels answered the death summon also, not in sorrow but the joy that comes to the faithful. He was seventy-eight years old.