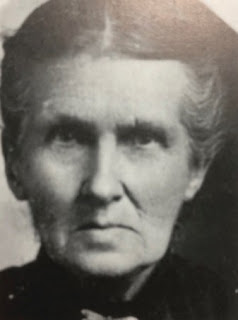 Jane Ann Sheffield was born in Bethany, New York on February 16, 1834.  Her parents were Anson Sheffield and Maria Mott.   Jane Ann was the eighth of nine children.  Her parents became acquainted with the Prophet Joseph Smith and were baptized into the church at an early date by Robert Samuelson in Kirtland, Ohio.  The Mississippi and Ohio Rivers were the frontier in those days.
When the saints were coming west in 1850, Jane Ann was sent ahead to travel with the Ferimorz Little family and help take care of their children.  She milked cows and hung the pail under the back of the wagon, so it would be churned into butter for supper.  Jane Ann walked most of the way to the Salt Lake Valley, as there was no room for her to sleep in the wagon.  She enjoyed the evenings of singing and dancing while on the trail.  After the company arrived in Salt Lake, Jane stayed with the Little family until her parents arrived in the valley in 1852.  After their arrival they travel onto Payson with their family.
The Sheffield family then moved to Payson to settle down.  It was here in the early fall of 1852 that Jane first met her future husband, Thomas English Daniels.  Jane would go to the fort every day to milk the family cow and Thomas was there for the same purpose.   Thomas was flirting, and went to her at once and offered to milk her cow.  Jane explained to him that her cow was not used to strangers, but Thomas insisted.  He sat down on the stool and proceeded to nearly fill the pail with milk, when the cow suddenly turned her head and got a good look at who was doing the milking.  The cow lifted her foot and with a kick, sent Thomas and the milk sprawling on the ground.  This introduction soon made Jane and Thomas the best of friends.
That friendship developed into love and they were married on November 25, 1855, in Payson, Utah.  Thomas described the couple’s first few months like this, “Our bridal chamber was in a one room log house that my mother and brother occupied; mother on her high post bed in one corner, Joseph on the floor in another corner, and my bride and I made our bed on the floor next to the fireplace.”  Thomas soon built Jane a two-story adobe home where they raised thier ten children.
Jane Ann made some of the best pastry and bread, cured all the meats, and carded, spun and wove on the loom all the clothing for the family.  Thomas and Jane were the parents of ten children.  Jane also taught Sunday School and filled other service positions for the church.  Jane’s eldest daughter, Louisa Jane, died at the age of twenty-two, leaving her mother and father a newborn baby to raise along with their large family.
Thomas and Jane celebrated their fiftieth wedding anniversary on November 25, 1905 surrounded with family and friends, in the same adobe house that Thomas built them when married.  A year later, Jane caught pneumonia and passed away suddenly on October 18, 1906.  Thomas followed her quickly to the other side, passing away on November 6, 1906.  The Daniels couple are buried in the family plot in the Payson Cemetery.