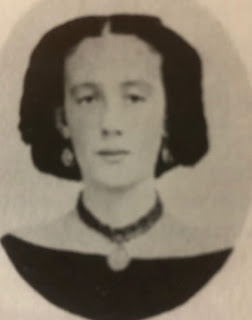 MARY ELIZABETH WIGHTMAN DALEY
Mary E. Wightman Daley was born the second child of Charles Billings Wightman and Mary Ann Dixon Wightman on August 22, 1846 near Kirtland, Ohio, on the banks of the Erie where the Latter-day Saints had made camp for the summer.
Her father was a maker of buggies and wagons and made a good living for his family. The family home was a gracious old stone house on a beautiful piece of property in Kirtland, Ohio. Charles Wightman, a convert to the Church of Jesus Christ of Latter-day Saints, was a very spiritually minded man although not at all demonstrative about his religion. He helped build the Kirtland Temple and was commanded by Joseph Smith to stay in Kirtland, Ohio to help the saints repair their wagons in preparation to leave Kirtland for the West.
In the summer of 1862, the Wightman family, consisting of two parents and eight children set out on the first lap of their journey westward. They went by train from Kirtland to Cleveland, Ohio, then they boarded the river boat for their trip to St. Joseph, Missouri. From St. Joseph, they went to Council Bluffs, Iowa, and then on to Winter Quarters in the Territory of Nebraska.
For the second lap of their journey westward the family traveled with the Isaac Canfield Wagon Train, The Wightmans bought two wagons and two teams of oxen and set out for Salt Lake City in a forty-wagon train.  In a wagon train of that size, as many as two hundred people traveled together. Charles Wightman was the blacksmith and wagon smith for the train, shoeing horses, setting the wagon wheels, and making repairs. He was also the dentist on the journey. His practice mostly consisted of pulling teeth. Everyone in the wagon-train loved him and called him "Uncle Charlie.
On the westward trip, the wagon train stopped about every two-weeks declaring it "family wash day." The children's job on these wash days was to gather buffalo chips to make a fire for heating the water. On one of those wash days, Arthur, who was just leaning to walk, put his hand into the hot ashes and burned it so badly it was crippled for the rest of his life.
Often when they stopped, Indians came around the wagon train and begged for food. The leaders taught people to be fair in their dealings with the Indians.  Because of this policy, there was no major trouble with the Indians en route to Salt Lake City.  In her later years, Mary Wightman told stories of the trek. She said she remembered spreading out their blankets and giving crackers to the Indians. She remembered that her father’s team led the wagon train, and she told of driving the entire distance to Utah without using the whip. She also told how the oxen would kick, so they had to get out of the back of the wagon instead of the front.
One of the thrills of the journey came when the wagon train was nearing the end of its long trek.  Mary’s mother's brother, Christopher Dixon, came out from Salt Lake to meet the wagon train. He brought a team of horses and a light wagon. He took the Wightman children back to Salt Lake City with him. One night they were camping in a cave with a bear. They also spent one night in EchoCanyon. They reached Salt Lake City a week ahead of the wagon train. 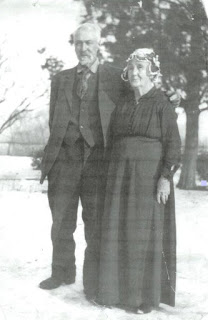 When the wagon train arrived in the Salt Lake Valley in 1862, Brigham Young sent them to Payson, Utah to make their home. Mary often told how her uncle, Orrawell Simons, had sent her future husband,  Mathew Henry Daley, to the Point of the Mountain to meet the wagon train and escort them to Payson. Mary said Mr. Simons had told Mathew to take the "pick of the girls,” and how he'd looked when they met him.
Mary often told of her wedding day, March 1, I863. There was a large crowd of relatives at the wedding. During the next two or three years, Mathew spent much of his time rescuing saints whose wagons broke clown or who were stranded on the prairie. He had a four-horse team and a large wagon which he used in these operations. During this time Mary lived with her aunt and uncle, William and Jane Wightman. They raised calves and made and sold butter and cheese. Also, during this period, William and Amy were born. William did not live very long.
Between trips, Mathew worked for his father-in-law, Charles B. Wightman, in the blacksmith shop at 814 South Main Street in Payson. Sometime in 1866, he began to work in the blacksmith shop on a regular basis. He built a little house on Cow Lane known as the Gary Stevens House. Here Mary, Lille, and David were born.
Soon after Arthur was born, Mathew sold their house to Uncle Jesse Knight and the family moved to Thistle Valley where they built a log house, The Indians stole all of their cattle, so they moved to Grass Valley and built a two-room log house. Here Carolyn (Dollie) and Wilford Frank were born. Then they went back to Payson living in the Wightman house at 814 South Main where Hyrum and David were born.
It was hard to move from place to place with such a large family.  Mary had many hardships making a home for her family in various places and circumstances.  Nevertheless, she loved the Lord and was always willing to help the poor and those in need.
She had a vivid recollection of Kirtland, Ohio and told of things that occurred in the Kirtland Temple after most of the saints had left. She told entertaining Martin Harris at her parent's home and of his testimony of having seen the Angel Moroni and the Gold Plates from which the Book of Mormon was translated.
In 1892, Mathew drove his cows from Grass Valley, Koosharem and rented the Dixon Ranch east of Payson. They made cheese during that summer. He built the Daley home located back of the high school on Canyon Road.  He hired Chet Brimhall to lay the rock and brick. The brick was made west of Payson, the lime was hauled from Provo, and the lumber came from Grass Valley near Koosharem. Matthew paid the men with fresh beef he had raised. This home was one of the finest homes in Payson at the time, with a blacksmith shop in the rear and fifteen acres planted into orchard, berries and garden. They sold produce to the miners going to work in Eureka. Mary and Matthew lived here until they bought the Roy Porter home on South Main Street, Payson.
Mathew Daley passed away on June 30, 1920. It was a lonely time for Mary, but she continued to care for her home and yard, and her family. She loved to tell the stories of her life, and often told of the message Eliza R. Snow had given her, that she would be like "Sarah” of old with children in her old age." She knew the gospel of Jesus Christ was true and that Joseph Smith was a true prophet, and she often bore her testimony to her children. 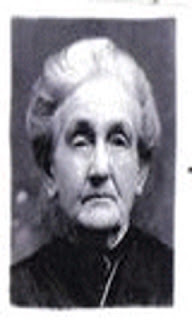 In her later years, children or grandchildren lived with her to care for her and spent the last of her eight years living with her daughter Carolyn (Dollie) Mansfield. Mary Elizabeth Wightman Daley died in Payson, Utah, February 5, 1931 and is buried by her husband in the Payson City Cemetery. She was a loving mother and grandmother and a faithful Latter-day Saint.
Posted by Dee at 4:39 PM