The Douglass’ built a substantial home in Payson on the southwest corner of today’s 100 North and Main Street. Their long adobe home had a gabled room on the east and it became the first Douglass store. It stocked everything from oats to ladies bonnets that were millinered by Agnes. Agnes operated the first millinery in Payson. Originally she used one room in her home.
According to Orson F. Whitney, “During the Blackhawk War William Douglass acted as commissary for the militia and aided materially the companies sent from Payson to protect the inhabitants of the Indian-raided districts.” 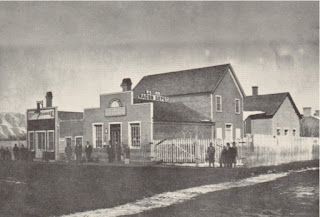 In 1861, William established a mercantile business, in which he prospered. Eight years later on 9 January 1869, he with others, founded a cooperative mercantile store. He personally put a large amount of merchandize to start the business, and in which he took stock. For twelve years he was it’s successful superintendent.” He also took stock in the Provo Woolen Mills and in the Z.C.M.I in Salt Lake City.
William’s expertise as a tailor, small business owner in Scotland and St. Louis, coupled with his faithful service and obedience in Salt Lake City likely contributed to his call to serve as superintendent. This mercantile was an extremely successful venture under his leadership, to the benefit of the stockholders and himself. William always kept the financial books for his businesses and the cooperative.
One account is given of William’s merchant trips to Salt Lake City for stock. “Each trip involved a certain amount of risk as he usually carried several months worth of cash on his person. The country was sparsely settled and the trail by buckboard or ox-team was a long lonesome one, taking usually two to four days. On these occasions William carried a bamboo cane. Its handle was attached to a stiletto that was cleverly concealed inside the hollow stick. He was never called upon to use it, but there is little doubt that he could have ably defended himself.”
Marie Douglass Stevenson Stewart, great-granddaughter of William and Agnes Douglass and longtime resident of payson, further describes security at the Douglass Mercantile, “The accumulation of cash that piled up between journeys was another problem. Then as now, there were those who watched and waited for the opportune time to rob a store. A great deal of ingenuity was demanded of the merchant to protect himself. The day’s receipts were hidden in the bottom of a bean barrel, the toe of a boot, or any other place the storekeeper felt a thief would not be likely to look. Though William went to great lengths, even to putting bars on the windows, his store was broken into several times. To prevent robbers from damaging his new safe, where he kept only important papers, he hung a sign on the door: ‘This safe is unlocked’. One time he was awakened by noises and caught two thieves in the middle of ransacking his store. He thought he had taken them by surprise, but instead they surprised him by making their getaway through a large hole in the wall that must have taken many nights to chisel out. The snow that had counted on to cover their footprints had stopped falling and they were easily tracked to a straw stack where the loot was recovered.”
William built a fine commodious store across the street north from his original store, which was then one of the best in Utah County. The new store building was of frame construction with a high front. Above the main outside entrance was the inscription, “IN HOLINESS TO THE LORD” arched above the All-seeing Eye of Jehovah. The same symbol was above the entrance of each of the stores he had operated. Brigham Young had directed that these signs should be erected for the purpose of indicating to members of the church that in patronizing the store that displayed the sign, they were patronizing member of their own faith, a significant factor for church unity. President Young believed that the cooperative movement would it make possible to bring goods to Utah and sell them at low enough prices so all could afford to buy. The profits would go to the Mormon themselves. 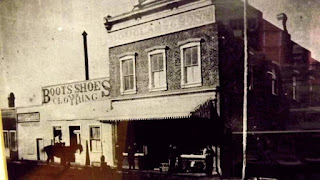