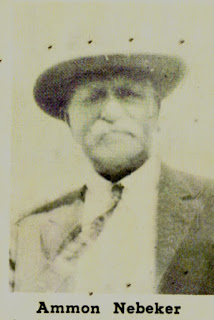 “Ammon Nebeker became the Fourteenth Mayor of Payson and took office in January 1906.
The electric plant at the time wasn't paying its way. The light bills were hard to collect. At a meeting held January 15, 1906 it was decided to employ three electricians .to run the powjer house; to establish a meter rate at one dollar a month minimum, eight cents per kilowattt above 13 kilowatts. The bill to be paid between the first and fifteenth of each month, those delinquent to be cut off with a five day notice.
The sexton asked for a machine for lowering caskets into graves. The present method being very inconvenient.
Early in the morning of May 7, 1907 the citizens of Payson were aroused. A large reservoir had broken up the canyon. A large stream'of water came-rushing down upon the community. The flood did a great deal of damage to the property but no lives were lost, although some of the people in the "Hollow" had to be taken out of danger on horse back.
The flood washed out the dam turning the water to run the electric plant was also washed away along with the flume.  An ejector was bought so the plant could be  run with steam.
A hydro-electric power house was erected at the mouth of Spanish Fork Canyon. The original purpose was to furnish power for driving the Strawberry Tunnel, which was under construction at the time, and construction of dther features comprising-the
Storage* Works. On completion of the power house, the government met with the Payson City Council on Nov. 20, 1907.  They discussed the probability of furnishing electricity to Payson. On investigation,  it was found they could secure the power cheaper from Spanish Fork power house so in due time Payson changed over and abandoned their own plant at the mouth of the canyon.
Payson people were always looking for ways to improve their community.  They wanted paved sidewalks in the downtown area. Some of the citizens met with the council and it was decided to pave the sidewalks in the downtown aea of Main Street. The city would pay half and the property owners the other half.  On May 30, 1907,  the contract was given to David McDowell to pave the sidewalks on both sides of Main Street for 17 cents per square foot.
The work soon began and the first year the side walks were laid from First South to First North on both sides of the street. It took longer to put in paved side walks then, all the cement used was mixed by hand on a flat board.” *

*Quoted from “The Payson Story” page 15-16, published by the Payson Centennial Committee, October 1950