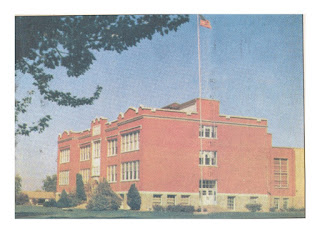 While I was at the hospital getting an epidural in my back last Friday, I had so many nice compliments on this column and I thank each of you for those encouraging comments. Isn't it fun to jog our memories and remember things we haven't thought of for ages? Linda Carter, who works at the hospital, grabbed me and said,  "I love reading about all the old things we had in Payson. What are you going to write about next?"
I just looked at her and said "I haven't decided yet. Got any suggestions?" She then said, "write about all the old school teachers we had at high school that were thereforever". So Linda, here we go.
This column is about the old high school that was between Sixth and Seventh South on Main Street. (it's now torn down).  The high school was built in 1912. Now I don't go back that far, although some of my grand kids may think I do. I went to that school in the early fifties. The school colors have always been the silver and the green but we have not always been the Lions. Actually at first they were known as the Beetdiggers  (probably from all the sugar beets Payson farmers use to raise) Then they were known as the Buffaloes. That was because Avard Fairbanks gave them a sculpture of a Buffalo he had made.  Then in 1928 the Lion was chosen as the mascot from something the Lions Club had done and it has been that ever since. 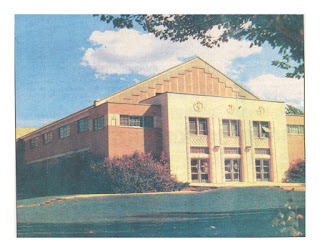 Louis Bates was the principal for 20 years, from 1934 to 1954.  He died and Reed Jones moved up from Jr. High principal to the High School principal. Jones was there for two years before he passed away and then Arch Williams took over as principal. Then it went on to Harold Hawker (Marilyn Spencer's dad), Lynn Powell and so on.
I called my brother,  DeLynn Heaps,  and ask him who his teachers were when he was in high school (he's 12 years older than me) and surprisingly, most of the teachers were still there when I went to high school. Let me jog your memory and name just a few. There was Arch Williams, J. Rowe Grosebeck, George Cheever, JD Christensen, Clara Johnson, Doyle Liddle, Howard (Huck) Holladay, (he was at the Jr. High when I went there), Don Fuller, Gene Hillman (former mayor Russell Hillman and Marianne Evans' dad) Miss Margaret Byrd who then married Arch Williams and there were more. But guess what? Those are the teachers that were there 12 years later when I went to high school. 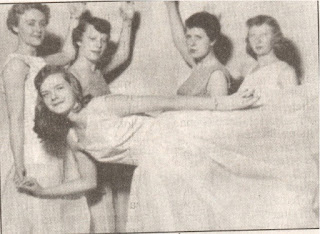 Who could forget Miss Johnson and her dance reviews? She played the same little song on the piano for us to practice to. I can tell you this, those dances were nothing like the dances of today. Why Miss Johnson would have had a heart attack if we would have done some of the moves like they do now. WOW! In one yearbook under her picture it said she put on a dance review that was the envy of all the other schools (?) Maybe they were then. The kids nowadays would think they were dorky and they probably were.
She was also over the cheerleaders and pep team. At that time, the girls did not have to try out for the pep team. All the senior girls belonged to it. We did have try outs for cheerleading and we could only cheer lead 2 out of the 3 years we were in high school. Now I don't know why but that was the way it was. For some reason, the first year Iwas cheerleader, anything that went wrong, she blamed me. (Ican't understand why, I really was just an angel) I think she wanted us all to know she was boss. She went on to really like me though.
Those were the days that we actually made up our own cheer routines. Now days, they have cheer camps and tons of outfits and accessories and it costs mega bucks. I had two daughters cheer 3 years each and we about had to mortgage the home to pay for it all. When they go to cheer camp, every school learns the same cheers. When we cheered, the whole studentbody yelled with us because they knew all the yells. (Y’a ready to roar --why sure) 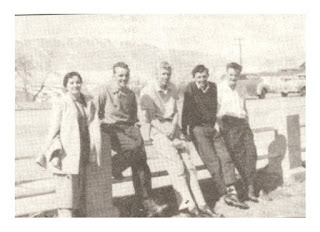 JD Christensen was the band teacher and he also taught algebra. Itook it from him and loved that class. He always said I did the problems the hard way but it was easiest for me. I would get it right and that's all that mattered.
Ralph Menlove was an excellent teacher when I was there and everyone loved him. I remember four of our "gang" (you couldn't call us that now because it means something totally different) Anyway four of our little group or clique or what ever you want to call it was in his home room class our sophomore year. He walked in the first day of school and placed each of us in different corner desk so we couldn't be by each other. You'd think he thought we were trouble makers or we talked to much or something. (not true. We were really good kids (?) )
Remember Mr. Groesbeck? I took American History from him. I never could tell if he was talking to me or the student 3 rows over. He was really up on his American History and a good teacher.
There were several other teachers like, Don Fuller (football coach), Verl Sudweeks (basketball coach),  Ben Leatham, (ag teacher),  Ed Cutler (taught ag and then English), Arthur Powell (taught type),  Grace Hiatt ( who never bothered to shave her legs.) She taught shorthand) I'm not sure kids now days even know what type and shorthand are.) Arch Williams(taught speech, drama, and English. I was extremely hard to get an A out of his class).
In Seminary which was held across the street (where the Family History Center is now), Laura Shepherd taught seminary for a long time and then there was Lars Bishop and Osmond Dunford who taught there also. There were only 2 rooms to teach in.
We had a lot of fun in high school.  We had the famous Dance Reviews held in the gym south of the high school. It had 2 dressing rooms and we would use those to change our dance outfits. The gym had a balcony all the way around the hall. Basketball, wrestling ances, dances and other activities were held there also.
We also had the FHA (Future Homemakers of America) overnight parties at the school. As I recall, at one of those parties, someone set off the fire extinguishers. Chaperones were not happy about that and it kept them busy keeping the boys from sneaking into the school while the girls run around in their p.j.'s. We also had the homemaking fashion show from the sewing class. Afton Oborn was the teacher.
Slacks were unheard of to wear to school. We wore dresses or skirts with a dozen starched stiff slips underneath and flat shoes were the only ones we could wear. High heels were for dances or church.
There were no drivers ed classes and probablythe most fun we had was our lunch hour. We would all go out on the lawn (in warm weather) or sit on the old pipe fence and socialize. That fence run all the way around the school property.
There were not cell phones and texting, not very many drove cars to school. We walked (now there's a novel idea). If we did get to drive one day, we would drag main after school. Does that sound thrilling? Course gas was onlylike 20 cents a gallon. We could put in fifty cents worth of gas and run all over and even to Spanish Fork to check out the boys. If we walked, we usually stopped into the drug storefor a drink (five cents) or at the Dew Drop Inn. That was a little cafe that stood where the parking lot is at the new American Beauty Academy.
So Linda -there you have it, all those teachers that were at the high school forever. Didn't they seem old to us at the time? (they were probably all of 35 or 40) Gee it's fun to look back and remember when...