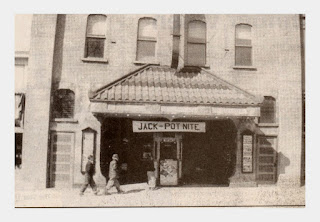 STAR THEATER and HUISH THEATER
Before I start my article today, I would like to apologize for apparently not using different
pictures with last week’s article.  I’m sure there are a lot of the old students that would have liked
to see their old pictures in there, but the ones that I used were what I had.    I know there are many
who probably know more about things I write about, but it is the things that I remember.  I enjoy
writing these articles and reminiscing and I do appreciate the positive comments and compliments
I receive.
Now on to this week.  Do you remember the old Star Theater?  That was a neat show house. The theater was built way back before my time in about 1910.  I do remember reading that
Roland Lindsay (the Lindsay Shoe Repair man on Main Street next to Roe’s Bakery; also the former bishop of the Payson Park Ward who started the Salmon Supper as a fund raiserfor the ward; and also the father of Myrle Anderson, Jean Hancock, and Barbara Roper; was one of the first managers of the theater.  It was built to accommodate 700 people.  It had a balcony that was added a few years after it was built.  There were stairs leading up to it from each side of the foyer. 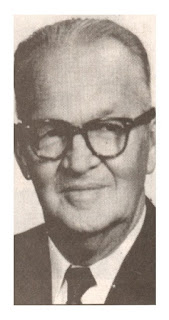 When I was going there to see films, Gene Braithwaite (Mary Lou Daley’s father) was the manager. Who could ever forget that wonderful, generous man?  He was so kind to everyone.  He always gave those who were handicapped or not fit into society, a job doing small things around the theater. He made them all feel needed.  He was so Christ like.
He used to print up show bills and have some of the young boys in town pass them around the city.  He would give each of them a show pass to see all of the shows that were on the advertising bill they took to all the homes. 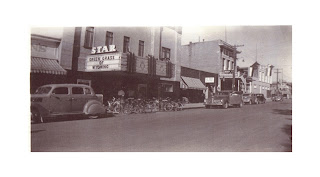 He was with the Huish Theater Enterprises for 34 years.  He was Mr. Sound Man of Payson. He used to put big speakers on the top of his carand announce the parade entries as theywent by the park every year during Onion Days. He had an organ and played beautifully. He was always willing to play for funerals or any other function.  He actually the first to start playing Christmas music at Christmas time from large speakers he placed on the top of the show house building.  Some people never knew where the music was coming from but it surely added to the atmosphere at Christmas time.
Now back to the Star Theater. It had a ticket booth at the front in a little glassed in box.  The admission was 15 cents for children under 12, 25 cents for students and 50 cents foradults. We used to take a quarter and after paying to get in, we had plenty for goodies to eat while the show was playing.
The candy counter was right off the foyer on the east side in a little room.  The restrooms were also through that room, boys on the right and girls on the left.
The balcony was so fun to set up there and watch the movie and everyone down below.  Mary Lou Daley told me she was inthe fourth grade andshe had a “date” with a school mate, Leon (Doug) Staheli and they sat up in the balcony.  She was thrilled because he held her hand and half way through the show he let go and she looked over at him to see what was the matter, and he was sound asleep.  (Exciting date you were Lou).
My parents used to take me and go to the movies every change that was made after my brother LaMoyne died.  They couldn’t stand to stayhome. He was a verytalented little boy that sang and yodeled all over the state.  He was only six years old.  He won many contests and even went to Salt Lake to sing at a contest where the winner would have a chance to sing on the Amateur Hour with Major Bowes in New York City.  Bowes had a talent show that was on the air for a long time. LaMoyne only lost by a few points. An adult by the name of Lowell Hicks, who played the xylophone, was the winner.  At one time, Mr. Braithwaite had made some records of my brother. One night as my parents, my other two brothers, DeLynn and Lavell, and myself were watching the show, we heard the voice of LaMoyne singing from the projection room which was also part of the balcony.  Needless to say, it shook my parents up a little to hear his voice play from those records.
There were some stairs right to the east side of the theater entrance that led up to an apartment.  Anna Mae, Gene’s daughter, lived there with her husband.
One of the most interesting bits I found out was, Peteetneet Creek ran right under the theater. 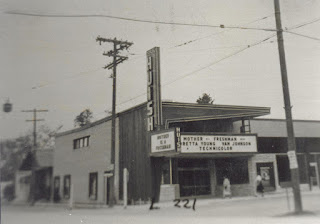 Charles Huish, who owned the Huish Theater Enterprises had intended to build a new theater on the corner west of the Star Theater.  World War II came and the plans were put on hold.  Mr. Huish died and his son-in-law, Vincent Gilhool, took over management of the theater chain.  In 1949, the Huish Theater was completed and opened.  It was a beautiful new building.  Everyone was thrilled to see it built.  It had the ticket booth to the left on the outside of the entrance.  Just through the large glass doors on the left was the candy counter.
You then went through a set of doors into the large inner lobby. Across the east wall between the two entrances to the auditorium were three large murals. They had a person go out to the West Mountain and take pictures of Payson.  He did it in three sections and had them blown up very large and place in the  large center area. On each side was large murals of scenes from Payson Canyon. They were spotlighted and they were quite a showplace.  It was fun to stand and look at the picture and pick out where we lived and all the places we could identify.  It was too bad it was not glassed in because kids started to make scratches on it.  Ihave often wondered whatever happened to those beautiful murals when the theater closed a few years ago.
There was a Mother’s Room or cry room.  It had nice seats with a large glass window to watch the show and of course it had sound.  It was nice so mothers could take the small children in there and they would not disturb the other patrons.
The projection room, office and men’s room were upstairs also. On the west side of the theater next to the highway, theyhad large displayareas for upcomingmovies. One of those frames could be opened and reels of film could be left or picked up by the delivery company.  They could then be raised in the small elevator to the second level to the projection booth.
I guess a lot of parents thought the show house was a good baby sitter as they would drop their kids off and leave them all day.  Sometimes Mr. Braithwaite had to call parents to come and get their children so he could close and go home.
He always worried about the kids crossing the highway and he tried to get the city to put a stop light even back then.  Here it is 58 yearslater andthetraffic is 100 times worse and there is still no stop light at that busy corner.  Many times he would stop traffic and help the kids across the street.  He was so thoughtful and caring.
Both the Star Theater and the Huish Theater stayed open together for a while and in 1951 the Star Theater was closed and stood unused until about 1956 when it was torn down.  Sad day!  I loved that old theater.  In 1972, the vacant lot was sold for a parking lot.
The Huish Theater was managed by Mr. Braithwaite until late 1965.  It was then closed at that time.  It  remained closed for about six months until Sam and Dorothy McFadden from Salt Lake City leased the theater.  They had been involved in the film distribution business for many years. They had always wanted to have a theater of their own. When Mr. McFadden retired from his position with Columbia Pictures, they leased the theater in the fall of 1966.
The McFaddens operated the theater for about 14 years.  Mr. McFadden died in 1972 .  Mrs. McFadden continued operating the theateruntil she retired in 1979. Harold Erickson then operated the theater for a few years.  Paul Mower bought the theater and operated it for a few years.  He was the last operator of the theater.  When the Stadium Cinemas opened, Mr. Mower closed the doors on the Huish.
What great memories.  It’s just been another feel good to remember when.