Remember When from the Past--Se 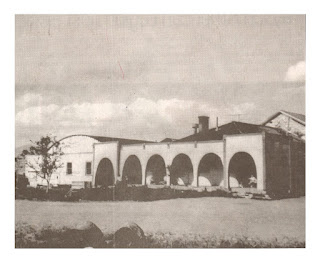 OLD ARROWHEAD RESORT
Many years ago, Arrowhead Resort and Swimming Pool was a big thing. Even though it was in Benjamin, it seemed a part of Payson also.  Everyone would go down to Arrowhead and swim.  It always opened the first of February and went up until September.
It was first built in 1920 by Dave Shuler and John Wignall of Payson at the site of natural artesian well. Later after the pool and picnic grounds were built. A partially covered dance hall was
added later.
I remember my folks talking about going down there to dances on Saturday nights.  Ralph Maliacccio owned the resort and also had a dance band. His band would play for the dances on Saturday nights.  His orchestra was very good and was very popular at that time.
It was a fun place to picnic and have reunions also. There were picnic tables and later boweries were built. Iremember the reunions that we had there. Myfolks were from Southern Utah from a little town called Widsoe.  Widsoe folded up, so to speak, in 1936 and everyone moved out but theygot everyone together once a year for a reunion. The first reunion were held at Arrowhead.
The swimming pool was so fun and it was so close to Payson that we could ride our bikes down there to swim as we got older.
The water came directly from an artesian well which used to flow into the pool.  The water was a warm 92 degrees directly from the well and it cooled to a very comfortable 88 degrees.  Other than chlorine for county regulations, no other chemicals were added to the water.
Oral and June Bartholomew bought the resort in 1955 while they were living in Payson. The building had a Spanish style to it.  You could go in and they had a long counter in the shape of an L where they sold candy, popcorn, cakes, potato chips and drinks. Theyalso rented swimming suits and towels.
It cost 35 cents for kids and 50 cents for adults to go swimming. Theyalways had life guards on hand.
The Bartholomew’s had 9 children and the older ones were just little when they bought the resort. Those kids swam like little tadpoles. We used to love watching them. As they got older, they became instructors and life guards. Oral would teach the scouts swimming for their Life Saving Merit Badges.
They eventually made an apartment there at the resort and moved into it. They also remodeled the outside of the building in 1963.  They took the old dance hall and made it part of their home.  It was a big family room.
In 1976, a big wind came through and took a section of the swimming pool roof off and they had to replace it. Later, they filled in the pool and it was sad to see it go but it is fun to stop and look back and remember when... 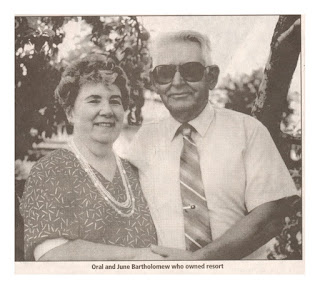