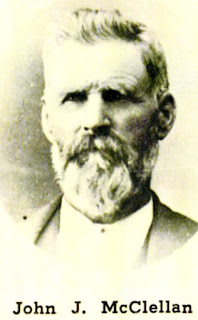 ”John J. McClellan was the new mayor to take office January of 1887. He held this position for two terms.
When Payson was first settled it was not laid off in streets or blocks as it is now. Just how early they decided to make straight roads through the town in both directions is not at the time known, but during Mr. McClellans reign of mayor we find where the city buys property from individuals or trades in order to make roads and side walks. The roads and side walks were graveled and culverts put in at the crossings. The road to the cemetary was white washed.
The Paysonian, a newspaper was established in 1888. It is said it was independent in politics. It was edited by Lawrence Jorgenseon and issued every Thursday.
March 8, 1880 the office of Alderman was abolished by the act of Legislative assembly, they are now called councilmen.
During the summer of 1880 the band of Provo and their leader, James W. Wallis promoted a Utah County band Contest. It was held in Provo in October. Five bands participated. Two from Lehi, one from Spanish Fork, the Huish from Payson and the Payson Brass Band. Spanish Fork won second and the Huish Band favorable mention. A prize was also given for the best cornet solo and bass solo. George H. Done received the prize for the cornet and William Clayson Jr. for the bass, each received a silver goblet. Thus Payson won three of the four prizes given.
In 1889, the Payson Brass Band and the Huish band consolidated and formed the Payson Silver Band.
In some old minutes we find on October 11, 1890, a petition from Thomas p. Daniels Jr. James A. Daniels, George Finlayson and G. W. Hancock under the name of the Payson Electric Light and Power Co. asked permission to erect poles and stretch wires in the streets and alleys of Payson City. This petition was granted and electric lights were turned on In Payson December 24 1890. The power consisted of one dynamo owned by Thomas E. Daniel Jr. and George W. Haycock. The dynamo was first located in the Finlayson Grist Mill. It ran from six o'clock p.m. until twelve midnight.
A Methodist Church and school, called the Iliff Academy was built in 1890. They published a weekly newspaper called the "Iliff Academy Herald." In the issue of February 24, 1892 consisting of eight pages, was the following adv. "The Iliff Academy and Payson Business College, Academis, Normal, Scientific, Philosophical and classical Courses, An Academic Preparatory, School of Music. Thorough Business College. A faculty consisting of six experienced teachers.

*Quoted from “The Payson Story” page 11, published by the Payson Centennial Committee, October 1950