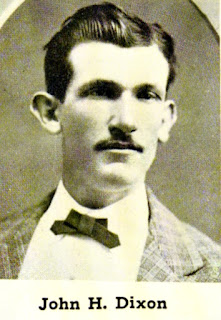 “Beginning the year 1900, John H. Dixon became the twelfth  mayor of Payson. In this year the band purchased new uniforms, paid for by putting on entertainments to which the citizens patronized liberally, this did not entirely pay for them so each member contributed.
A band contest was held in Spanish Fork in August. A prize of $50.00 was given for the best band. Bands from Springville, Spanish Fork and Payson entered. Prof. A. C. Smith was adjudicator. Payson won the fifty dollars.
A small reservoir was made a little way up the canyon so water could be stored in order to run the power house and a flume built from it to the power house.
Board side walks were placed in front of some of the stores on Main Street.
April 2, 1897 the City gave to the school district the west one-half block of square on the east bench to be used for a school building. In 1901 the Peteetneet School was erected on this ground and used for the grades.
On November 5, 1901 James Finlayson's grist mill burned down. This was a great loss not only to Mr. Finlayson, but to the town as this was the only grist mill.
The people of Spanish Fork, Salem, Springville, Payson, Santaquin and Goshen felt the need for more water for irrigation. They investigated and found a natural reservoir in Strawberry Valley which by doing a little work could be enlarged and would hold a great deal of water. They took their proposition to the government in 1902 but a committee was not appointed to work on it until 1904.
The Payson Silver Band built a large dance pavillion in 1902 on West Depot Street (Utah Avenue) and today’s 100 West.   It had a raised spring dance floor, the large windows could be let down in the summer to make an open air hall. It was built where El Roy Barnett's service station is now.
February 24, 1903, W. C. Orem was granted the right to build the Interurban Railroad into Payson. This electric railroad would run from Salt Lake City to Payson.”*

*Quoted from “The Payson Story” page 14, published by the Payson Centennial Committee, October 1950