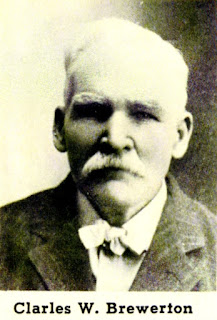 “On January 2, 1894 a new council took their seats with Charles W. Brewerton as the Tenth Mayor.
The cemetery was further improved by making a road through. This necessitated the moving of many graves out of the streets. The sunken graves were mounded up.
More streets were opened up and the roads and side walks graveled. An ordinance was passed prohibiting sheep from traveling certain streets in the city limits. In order to make roads two tongue scrapers were bought.
In the fall of 1894 all the reservoirs in the canyon were improved the ditches running into the reservoirs widened, the level of the East reservoir was raised five feet and of Maple Lake three feet.
Water mains (ditches) on tenth street between D and F streets. Water was taken out of the creek south of F street and turned back into main creek channel at D street. This made a constant stream of water on tenth street to be used in case of fires or other purposes. The line poles and hitching posts were placed upon culverts or water ditch line making the street wider.”*

*Quoted from “The Payson Story” page 13, published by the Payson Centennial Committee, October 1950