Samuel Douglass Building--Photo of the Day 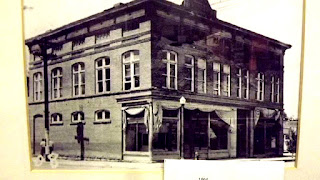 The two-story brick Douglass Building was constructed by Samuel Douglass for his general merchandise store. DOUGLASS and 1895 were imprinted in the triangular facade at the top of the" east front.  It was located on the northwest corner of Main Street and Utah Avenue.
The building had been constructed on the site where Sam's father, William Douglass, had built his barn in pioneer days. William had also built his 'home on the far north end of the block and his general merchandise store was across the street to the north.
During construction of the Samuel Douglass Building men and teams were under contract for $2.50 per day to haul brick from Benjamin and Salem. They often worked twelve hours per day in order to deliver the specified 2,000 bricks (or two wagon-loads) a day. Adobe brick used for lining was hauled from a yard on South Eighth West Street in Payson. Sandstone trim came from Diamond Fork Canyon.
The building was originally planned as a hotel, but Mr. Douglass opened a store instead and stocked it with dry goods, notions, shoes, groceries, candy, hardware, paint, glass, cement, coal and other items.
Coal oil lamps were at first used for lighting, but by 1897 Thomas Daniels had been hired to wire it for electricity. The store was heated with pot-bellied coal stoves in cold weather. On mild days coal oil heaters were used for heating.
Mr. Douglass was in business almost 20 years. He retired in 1911 and soon afterward rented the building to the Bertelson Brothers, whose store across the street had been destroyed by fire. They specialized in men's clothing until the early 1920's. After they left, the building was rented to a number of merchants including Roy Jensen. Ben Roe operated Everybody's Department Store in the building. Waldo Jackson and later Dal Adams had appliance stores there, Rusty and Harold Smith, a tin shop.
The second floor was used for offices and apartments and a certain portion was used for public dances and private parties. New doctors, Asa L. Curtis and Lynn D. Stewart, each established offices in the second floor. Dr. Stewart and his wife, Nellie and young son, Max, occupied one of the apartments. Attorneys R. A. Porter and R. W. McMullin, also had their first offices in the building.
Some time after the original construction of the building was completed, a smaller shop was built  onto the north of it. Here for many years the Payson Police Department had headquarters. Later the space was occupied by Hawkins and Rodgers (Willis) Barber Shop, Paul's Cafe (Wirthlin), Peck's Bakery, Bradshaw Auto Parts and Allgood (Dell) the Jeweler.
In 1953 the building was sold to J. W. Christensen, who had it razed and constructed in its place a one-story building to house the City Drug. He had previously been in business across the street in the Lewis Building with Elmo Christiansen as partner. W. W. Hansen, who had been employed in the business as pharmacist, leased and later purchased the business.
*Information from “Peteetneet Town, A History of Payson, Utah” by Maadline C. Dixon, page 59
Posted by Dee at 2:00 PM