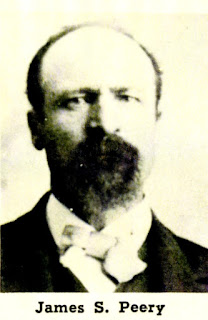 “James S. Peery went into office as the eleventh mayor in January 1896.  At the first meeting,  plans were made for a statehood celebration for Monday, Januray 6. Utah had just been admitted as a state.
The businessmen felt the need of a night watchman to protect their places of business during the night. They met with the city council and agreed to pay part of the night watchman's wages if the city paid the balance.
The people also felt at this time that an ordinance  should be passed to prevent minors from loitering about upon the streets, byways or other public places late at night. A curfew bell was bought on July 13, 1896 and a bell tower was built on the top of the City Hall for the bell. The night watchman then rang the bell by means of a long rope about 9 o'clock p.m. and all
children under twelve,  unless with a guardian, had to be off the streets.
Up until this time,  each town did their own assessing of taxes.  The council raised or lowered taxes as they wished. July 27, 1896 the County started to assessing the taxes, the city then only had the power to remit and rebate for indigent and infirm persons.
Fishing has always been a sport that people liked to indulge in. November 30, 1896 black bass were placed in all the reservoirs in the canyon. Maple Lake still has a few.
The owners of the Payson Electric light Plant wished to sell.  Payson City was interested and appointed a committee consisting of Thomas H. Wilson Jr., George A. Finlayson, J. M. Boyle and Mayor J. S. Perry to investigate the possibilities of building a power house at the mouth of the canyon and using water for power. The committee found a site very favorable.
The city then agreed to buy the plant for $2000.00.   Work was started on the building at the mouth of the canyon to house the electric plant June 9, 1897. On Sept. 31, the old plant was bought from T. G. Wimmer. On Oct. 25 a water wheel was bought and both were moved to the new building. November 1, the plant started operations in its new home. Junior Wightman was hired by the city to take charge. The people then had all night light service instead of until twelve midnight.
April 1898 an ordinance was passed that all births and deaths occurring in Payson, City had to be registered. Since that time, records have been kept.
The Globe-Header, printed August 27, 1898 makes this statement:  According to an announcement, the Globe-Header makes its initial bow to the public today. We do not intend to make any great spludge of a temporary nature, or any wonderful announcement, but shall endeavor to issue a clean and creditable paper, and ask the people to aid and assist us in our efforts." *

*Quoted from “The Payson Story” page 13-14, published by the Payson Centennial Committee, October 1950